Bitcoin Exchange-Traded Funds (ETFs) have been generating significant buzz lately, especially after the SEC rejection of the Winklevoss twins’ proposal. Other parties have since submitted proposals of their own for review and approval in a bid to satisfy the current demand for Bitcoin ETFs. This demand continues to increase daily but may not be satisfied any time soon, judging from the rejection rate of past proposals.

The SEC has rejected 15 cryptocurrency ETF proposals since the first application in 2013 and doesn’t seem like it will slow down any time soon. By the end of September 2018, there were already 9 pending applications submitted to the SEC.

The thought of a possible approval is currently keeping the community on its toes in anticipation of a massive bull run. As with every other thing in the industry, it is difficult to say for certain that the price of Bitcoin will indeed shoot up. However, looking at past events, this prediction is not farfetched.

Towards the end of 2017, Bitcoin futures were approved for trading and by September, the price of Bitcoin was about $3,500. CME futures were launched on December 1, 2017, and the price of 1 BTC surpassed $10,000. It continued to climb until it hit a peak of $20,000 later that month. Looking at these events, the expectation of a Bitcoin ETF approval leading to the biggest bull run in history isn’t strange. After all, it will be the first time a digital currency ETF is approved.

Unfortunately, the current regulatory climate is so unfavorable that the chances of approval seem unlikely. The SEC has cited several reasons including “significant investor protection issues”, liquidity and valuation problems and other regulatory concerns for its rejections.

Bitcoin ETFs have relatively low liquidity and trading volumes and follow volatile spot exchange rates. This will be unfavorable to investors, who the SEC has a duty to protect, leading to the commission’s continuous rejection of proposals.

So far, almost every Bitcoin ETF application has contained a request for Bitcoin’s price to be tracked through BTC futures contracts. These contracts would ideally be offered by financial market companies like the CME Group and the Cboe.

What is an ETF?

An exchange-traded fund (ETF) is simply a security that tracks some underlying real-world assets like oil, gold, equities, bonds, commodities or even digital currency. It also serves as a fund that allows investors to buy its shares and earn dividends from the investment. These shares are relatively easy to trade as stock and can eliminate barriers faced by investors when trying to acquire the underlying assets themselves.

By buying into ETFs, investors become exposed to a certain asset without the need to physically buy it. As an example, instead of going through the long and time-intensive process of buying gold, shipping it across borders, and safely storing it, an investor could buy an ETF that tracks it instead. This way, they can gain the same results they would if they had physical gold.

ETFs have been used for a long time to track benchmark indexes including the NASDAQ-100,  the Dow Jones Industrial Average (DJIA), and the Standard & Poor’s (S&P) 500 in traditional finance markets.

Stock market investors typically use these indexes as benchmarks to analyze the strengths and weaknesses of their own investment portfolios. They allow easy comparison with the overall market and enable the discernment of where the market currently stands. Other asset portfolios and commodities are also effective as benchmark indexes to determine market performance. 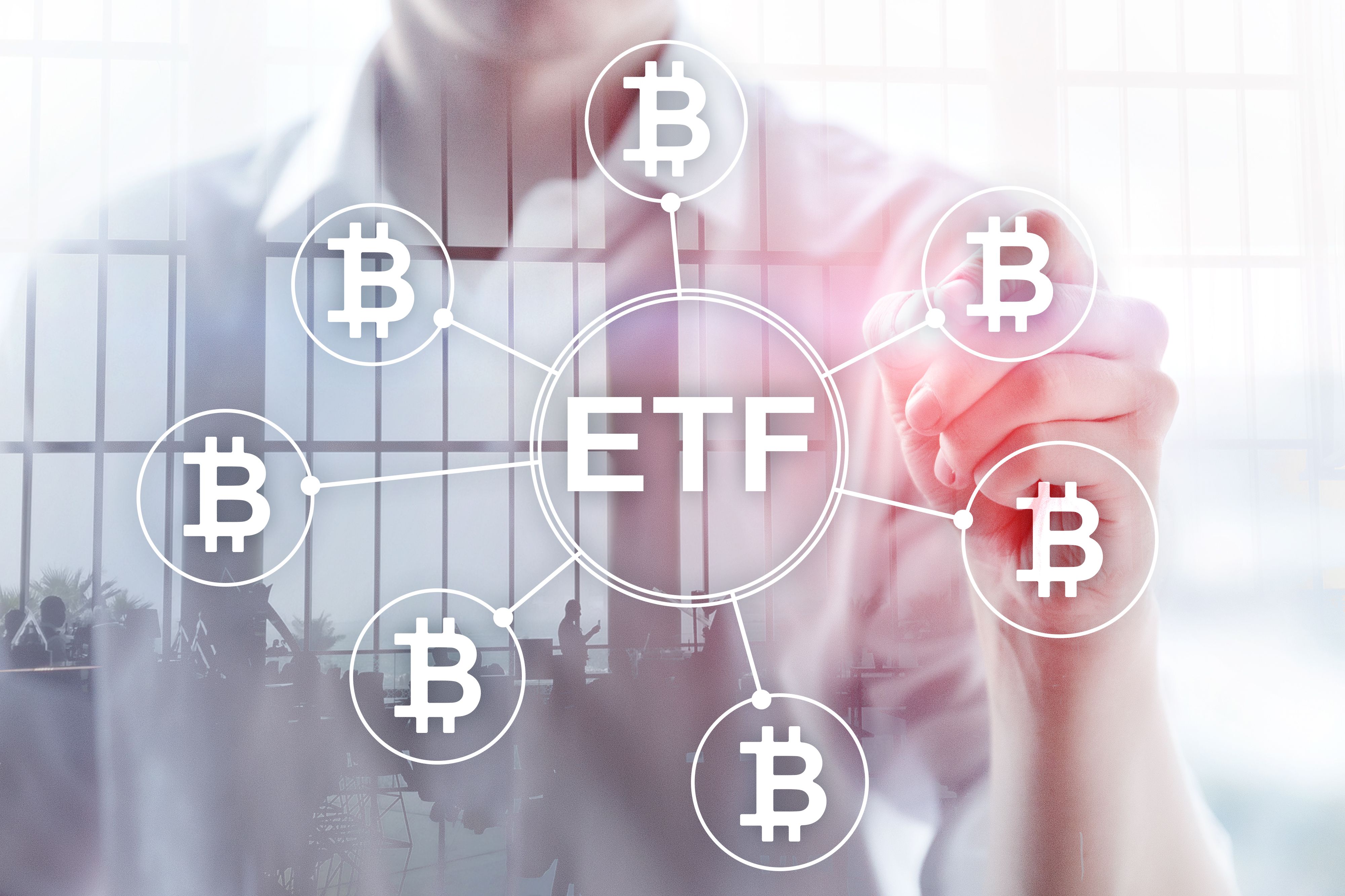 How are ETFs Created?

How are ETFs Redeemed?

ETF shares are redeemed in the opposite way they are created. Meaning that the authorized participant presents send the ETF provider a specified number of redeemable ETF shares. These form a redemption basket of assets.

What is a Bitcoin ETF?

Similar to its traditional counterpart, a Bitcoin ETF is an investment instrument, created with the intention of tracking the Bitcoin benchmark index while replicating its performance. This way, traders who have brokerage accounts can invest in Bitcoin (BTC), without the hassle of purchasing and storing it securely.

All the Bitcoin ETFs proposed so far, had BTC as their underlying asset so those who invest in them would also indirectly buy Bitcoin. The major difference between this option and buying BTC is that the former creates a safe environment for investors to trade a regulated asset. They would also have no use for Bitcoin wallets since they have no need to store their investment. This significantly reduces the chances of falling victim to fraud and theft.

How Do Bitcoin ETFs Work?

There are two major types of Bitcoin ETFs being proposed: those that physically hold Bitcoin and those that purchase Bitcoin derivatives. Both are good options with their own pros and cons.

This ETF type is almost similar to a basic model used to track Bitcoin indexes except for the fact that the Authorized Participant can also send cash instead of just Bitcoin. When this happens, the ETF provider can trade the cash for BTC and return shares of equal value.

This type of ETF mimics the performance of Bitcoin by trading Bitcoin-related assets like options, futures, and swaps instead of trading the cryptocurrency itself. Currently, one of the biggest worries concerning ETFs that hold Bitcoin is the custody risk involved. The situation requires investors to trust that their active manager will accurately approximate the performance of Bitcoin with derivatives.

Judging from the current tensions caused by recent exchange thefts, the industry is nowhere near a cryptocurrency ETF. There’s no telling how the SEC will continue to reject proposals until it caves into the demand and finally approves the first Bitcoin ETF. However, this does not mean that it cannot happen in the future when the ecosystem is more mature and has solved a lot of its underlying security issues.

For now, Bitcoin ETFs are already backed by the Commodity Futures Trading Commission (CFTC). If the SEC bends to the industry’s will, the effects can have a whole new meaning for Bitcoin adoption. At this point, there is no telling what could happen, but it would be interesting to see how a Bitcoin ETF is received globally.

The movement between traditional stock markets and the cryptocurrency markets is similar. This has been observed upon analysis of the gains and losses recorded in 2017 through 2018. However, if they actually do share a common ground, it may be based solely on sentiment.

IBM recently announced that it has developed a blockchain platform for banks to facilitate rapid clearing and settlement of global payment transactions. The corporate giant is currently working to provide new ways to carry out payments efficiently in real time, even in very remote areas around the world.