Bitcoin disrupted online gambling by giving online casinos a better way to structure their withdrawal and deposit processes. From dice games to slots, and other casino games, Bitcoin was the first popular cryptocurrency to change how online gaming is done. Now, Ethereum gambling is taking a different approach, but with the same disruptive goal.

Ethereum is considered by many in the industry as one of the most innovative digital platforms. This is partly due to its capacity for hosting decentralized applications, including games that rely on blockchain technology to function. Due to the advantages that blockchain offers such as immutability, security, transparency and total control over one’s assets, Ethereum has come across as a favorable platform for game developers. Where games have typically centered around the same structure of passing level after level to win a single title, Ethereum gambling is changing everything — and gambling websites like this are gaining popularity.

Due to the Ethereum platform’s decentralized protocol, which allows players and developers to create and own non-fungible transferable tokens, more game structures can be developed. Non-fungible tokens are unique to a single owner and can carry any value depending on a number of factors. As a result, they can be modeled after objects, avatars, game characters, etc. which can be bought, sold, and even bred. This has led to the creation of more interpersonal games that anyone can make money from playing.

As one would expect, since the launch of Ethereum in 2015, many of these games have been created. Some have become extremely popular while others only remain popular in small gaming niches around the world. However, it is important to note that not all of these games offer profitability, accessibility, or ease of play.

While some Ethereum games already have fully developed gaming economies and marketplaces with creative freedom, others are more focused on rewarding players with money as they play. It all depends on the player’s preference. The following games combine all of these features to give players the most profitable and enjoyable virtual experience.

Here are some of the best Ethereum games to play in 2019.

MyCryptoHeroes is a crypto collectible game that combines strategy with adventures. Extremely popular in Japan, it is modeled after games like Pokemon. Players collect tokens in the form of digital heroes and train them to fight in battles. After training heroes, players build ‘Tri-Hero’ teams and challenge other players.

Since every hero is unique, they can be traded in the game marketplace for GUM, its central cryptocurrency. It is completely free to play, but players are advised to buy heroes with great battle skills so that they stand a higher chance of winning battles.

Players can earn money on the site through a PRIME subscription which costs 0.1 ETH and allows them to accept rewards and build more teams. They can also sell land and valuable items found within the game. This is one of the best games to play for anyone who is looking for a profitable career-style game to gain currency. 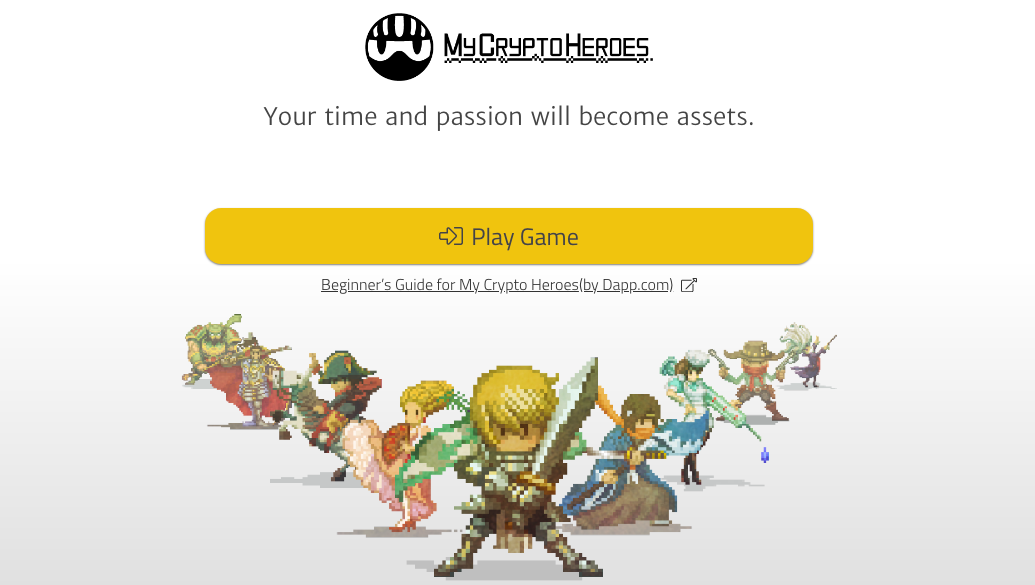 Blockchain Cuties is another popular decentralized collectible game like MyCryptoHeroes. It allows players to dive into a fantasy world in which they collect and breed ‘Cuties’ for battle. It was one of the first games hosted on the Ethereum platform and is now also hosted on TRON and EOS. Each Cutie is a non-fungible token that can be bred and sold for money. Although this may sound similar to the game structure of MyCryptoHeroes, Blockchain Cuties focuses more on breeding as a source of income for players.

Basically, a player acquires first-generation Cuties and breeds them with other ones that have attractive qualities. As the value of each bred Cutie changes, they can be leveled up and sold. The game also offers a lottery in which players can earn monetary prizes. Breeding cuties can be viewed as nurturing an investment until it pays off; for some, this experience is fun and relaxing. Blockchain Cuties is one of the best Ethereum games because of how personal and immersive it is.

In the world of crypto collectibles, Axie Infinity is considered one of the pioneers. Hosted on both the Loom and Eth blockchain, it is one of the most popular crypto games in existence. It is based in Lunacia, a fantasy gameverse in which players breed magical creatures known as ‘Axies’. These creatures can be used in battles and quests with other players for rewards in the form of ‘Axie’, the game’s main cryptocurrency.

Since all Axies are non-fungible, they are uniquely built. Each one has different combinations of eyes, ears, mouth, back, tail, horns, body shape, and color. These body parts have their own strengths which contribute to the outcome of a battle. As a result, some Axies are more sought after than others.

This is great for players, since in-game trade can be carried out easily through decentralized marketplaces like OpenSea. Axies can be bought in the form of eggs and bred, upgraded, and sold to other players who need them. This is the major source of income for Axie Infinity players.

Another income source is the purchase and resale of land within the game. Every plot is represented by a token and can be owned and developed by players. Another way to earn money is by winning battles.

Although Axie has all the qualities of a great crypto game, it made this list due to its large fan base. For someone who is new to crypto gaming, this is an advantage since there are more gamers to communicate with.

Etheremon combines virtual reality gaming with blockchain to create an immersive experience. It is a little bit different from other crypto collectibles in which players can go straight to the marketplace to buy basic game characters. Instead, Etheremon requires players to catch their own collectibles within its gameverse.

These characters, known as ‘Mons’, are monster-like creatures that can be sold or used in battle. Another major difference lies in how Etheremon drives the value of Mons. Instead of letting each Mons’ skills determine whether it is valuable, the game simply makes a Mon extinct. This creates an artificial scarcity that drives its price up faster. Anyone can play Etheremon for free on its website as long as they connect an Ethereum wallet like Metamask to the game.

Players earn money by engaging their Mons in battles or selling their extinct Mons in the marketplace. Compared to games like Cryptokitties which take a significantly longer time to become profitable, Etheremon makes the process faster. This is why it is one of the best Ethereum games to play.

Crypto Space Commander is a decentralized interactive game aimed at giving players a chance to experience what a space economy could be like. They travel through virtual space while discovering new planets, ships, and objects that can be traded.

Each player starts the game as a commander of a customizable starship. They commandeer the ship as they build their fleets through the collection of resources or by buying ships from the marketplace. Players can choose to be miners who travel around mining resources or pirates who attack other starships and strip them down for profit.

The game design makes it possible to incorporate new themes and characters at any point. For example, on June 4th, the CSC team announced that it would be bringing ships from popular franchise Star Trek to the game. Such moves make the game more relatable for a wider audience, which is a quality that not many blockchain games have yet.

Ethereum games are redefining the gaming world and gambling industry by creating profitable models for players. As a result, games can be considered one of the ways to increase a person’s cryptocurrency holdings. Sure, the games are fun and relaxing, but Ethereum makes it possible for them to be all those things while giving players a way to earn money.

Despite how far decentralized gaming has come, there's room for better models, more interesting gameplay, and more profitability. With the changes that Ethereum is scheduled to make to its design, there may be further opportunities for developers to wander into unchartered gaming territory.

Wondering what Facebook Libra is and if you should invest in it? Read this article to learn more about Libra and the advantages and disadvantages of owning it.

Interested in creating your own cryptocurrency? Read this article to find out the steps you should follow if you want to dive into the market of crypto development.