As a cryptocurrency investor, the product you are investing in is inherently unstable, and you need to be prepared for the impossible. But sometimes it can be difficult to imagine just what the impossible may be. If you are a TITAN or IRON investor, you may have noticed strange things happening with this cryptocurrency and stablecoin pair as of late. But how much of what is happening is natural fluctuation, and should you be concerned? Read on to find out.

Before discussing what recently happened to this cryptocurrency, it’s important to understand what exactly TITAN is and the technology that backs it. TITAN was created by a company by the name of Iron Finance, that wanted to build a stablecoin that would be pegged to the US dollar on a one-to-one ratio. They did just that, calling the stablecoin IRON, and in theory, this token should cost $1 per token.

This token exists on the Polygon network, one of Ethereum’s layer two solutions. Iron is reportedly backed by two different types of collateral to keep its value stable. One of these forms of collateral is USDC—a stablecoin associated with the Coinbase market. And the other form of collateral is the TITAN coin. TITAN is used on several different platforms to stake transactions.

When a user wishes to mint an IRON token, they will deposit USDC into the protocol on the Polygon network, and a TITAN coin will be used in the minting process, and then burned when the user receives their IRON. If the user wishes to pay back their IRON, they will be paid back their USDC put into the contract, and TITAN will be created as a result. The reason for this process is to automatically balance the funds backing the token in order to keep its price stable, well, in theory that is. TITAN’s price is supposed to increase and decrease based on market demand for the token.

TITAN was a fairly new investment, which is why everyone was shocked when it reached $65 a coin. It held there for a minute, but when the price began to drop down to $60 a coin, a bunch of investors, who invested heavily in the coin, decided to sell. This caused a problem because TITAN is priced based on supply and demand. So as the available supply of TITAN increased, the price began to decrease.

This caused a lot of small time and big-time investors alike to begin to panic, as the TITAN coin was still relatively new. This panic increased when someone submitted a transaction worth $200,000 USD. Suddenly, everyone began to sell their TITAN and the price entered free fall. But remember that TITAN is there to support something else, the IRON stablecoin. So when TITAN began to fall rapidly, IRON lost its backing and eventually it’s peg. This means that even though IRON was supposed to be worth $1 per token, suddenly it’s value too began to fall. Now people were really beginning to panic as the part of the project that was supposedly stable began to fall in value. 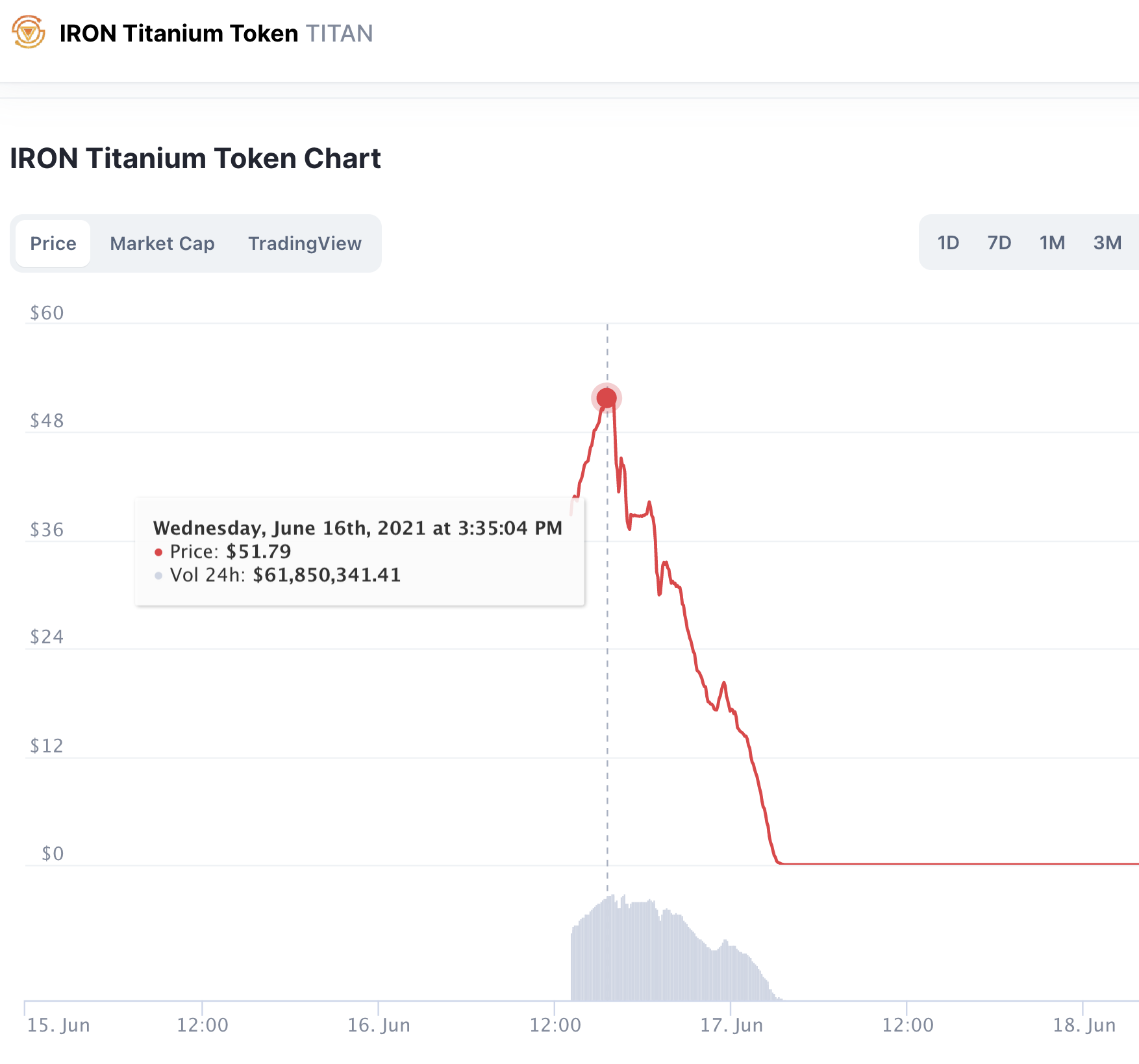 At this point IRON cost 90 cents total to purchase and could be sold for 75 cents of USDC and 25 cents of TITAN. If you are thinking this math doesn’t add up, well that’s because it doesn’t. And this is what is known in the cryptocurrency world as an arbitrage opportunity. Suddenly, cryptocurrency investors all over the world could turn 90 cents into a dollar, and they began to do so, after all, who wouldn’t?

But this scam caused another problem, because each time one of these investors sold IRON back, more TITAN was minted per the protocol, and because the price of TITAN is based on supply and demand, this drove the price down even further than before. And then this resulted in the IRON price also falling further, making the arbitrage opportunity even better for those who were involved. This started a vicious downward spiral, causing the price of TITAN to almost instantly go to zero.

The only way to resolve this problem is by regaining the peg that IRON is based on, and for a moment it looked as if that was going to happen, but the peg quickly fell again and the vicious cycle continues.

What Can Be Done?

Unfortunately the only solution to a problem like this one, is if the developers of the IRON coin change the minting protocol which results in TITAN being printed each time a user sells IRON. And although this may sound like a quick fix, these protocols take years to develop and it isn’t likely that the developers will be able to do anything soon. And unfortunately, even if they could, it is too late for a large number of investors who have already lost thousands of dollars. 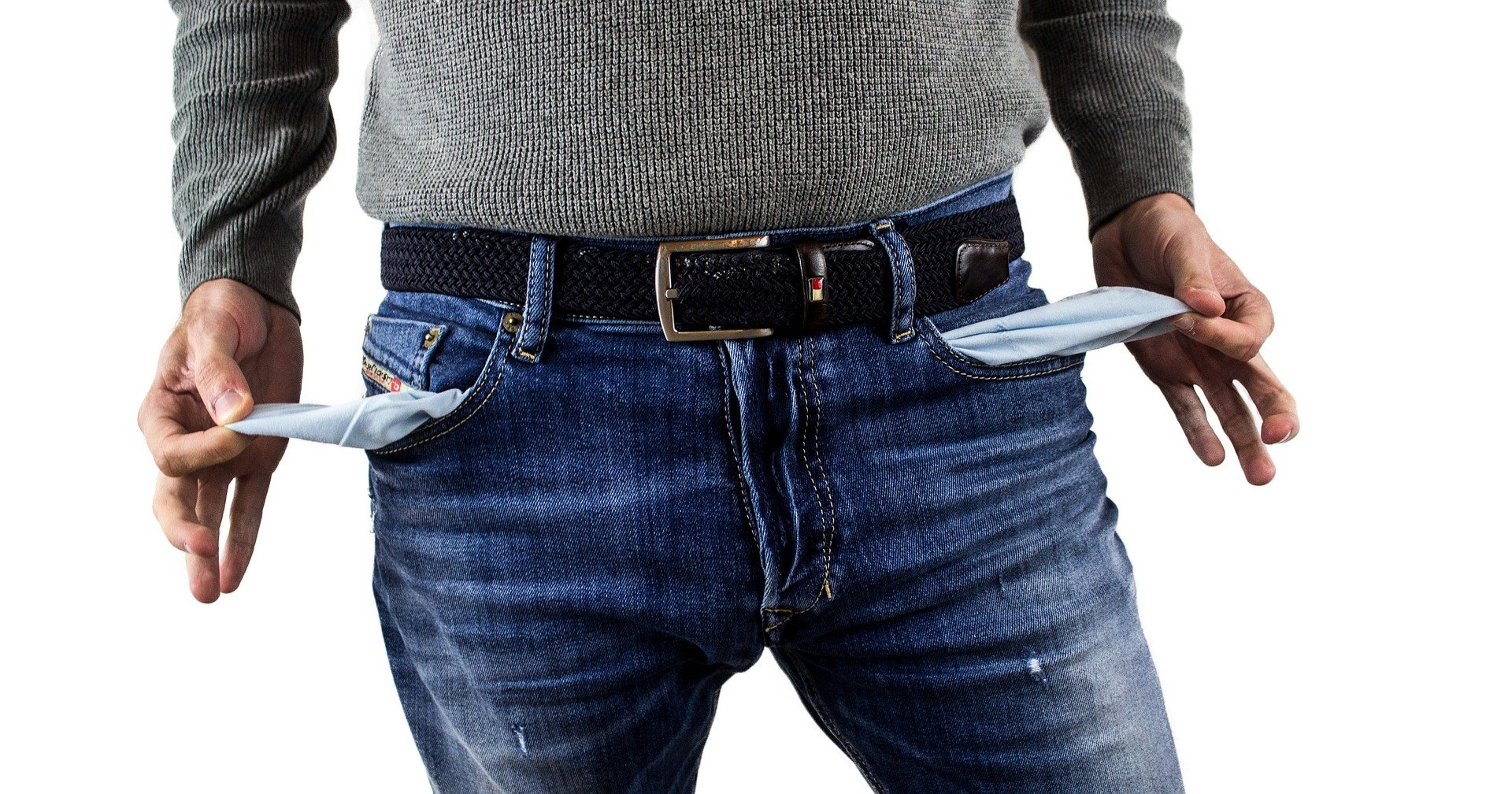 Because of the high publicity of this event, the developers of IRON have claimed that they will be reimbursing investors. But because a total sum of over $1.75 billion was lost, it is unclear how they will do this and there is a strong chance that those who lost money on the coin will never get it back.

What Does Mark Cuban Have To Do With This?

Billionaire Mark Cuban was very vocal about his involvement in the TITAN project, in fact it was well known that he had a lot of money invested in TITAN coins that he was using to stake transactions on marketplaces. When news of the crash hit the market, people began to wonder if Cuban was one of the big investors who’s sale of the coin started the free fall of the price. Although he denies it was him, and claims he lost money like everyone else, because of the nature of cryptocurrencies, it’s difficult to know for sure.

Don’t feel too badly for Cuban though, as he has a massive cryptocurrency portfolio full with many other projects that are doing just fine. This incident has left Cuban, and other investors clamoring for regulations on stablecoins. They believe if the US government could regulate the currencies that are allowed to back stablecoins, incidents like this wouldn’t happen. But until then, Cuban says he learned a valuable lesson when it comes to cryptocurrency investing thanks to TITAN.

This just goes to show the importance of research when it comes to investing in cryptocurrencies, and the nature at which you must approach investment grade projects. But even if you research a project to the hilt, it can still go wrong, so whenever you invest in cryptocurrency, be prepared to lose most, or all, of your investment.

The days where cash once reigned supreme are quickly coming to an end. And this includes in casinos. Surprising, but it seems like the casinos are the last hold outs in a soon to be cashless society. Find out more about the situation in this article.

When it comes to esports , nothing is more important that the tournaments that make these leagues money. So the fact that the T10 may be cancelled in 2021 is not good news. Read this article to find out what is going on, and what the possible fate of the tournament may be.