Altcoins are a dime a dozen. There are so many out there, and a large portion of them are suspected to be scams. So how do you know which ones are actually good investments? The truth is, it can be almost impossible to tell at times.

SafeMoon is a relatively new alt coin cryptocurrency created and run by Binance Smart Chain that comes with the slogan that it is a ‘safe’ way to go to the moon (as in the price of your investment in the coin). But upon closer inspection, cryptocurrencies like SafeMoon aren’t always what they appear to be.

Before you go out and buy SafeMoon, be sure to read this article. This way you will be going into your investment with your eyes open to the possible rewards, as well as the inevitable risks you may encounter.

SafeMoon is a cryptocurrency created by Binance Smart Chain, a player in the CEFI, or centralized finance world. This means that any product sponsored by Binance Smart Chain is not decentralized, and is overseen by the company. This is made quite obvious when you look at how SafeMoon operates. It uses a proof of authority consensus mechanism, meaning the outcome of every transaction is decided by Binance themselves.

SafeMoon was created by Binance as a way to transfer currency and store value within their ecosystem, a bit like Bitcoin. But this coin couldn’t be further from Bitcoin. As mentioned above, its consensus mechanism is the complete opposite, and when a SafeMoon transaction is completed, all holders of the token get a portion of the fee—Bitcoin doesn’t have anything like this in place.

SafeMoon also has a second part of the fee charged for transactions that is given to people holding the coin in liquidity pools on DEFI sites like PancakeSwap. Transaction fees for SafeMoon are quite high, set at 10%, with 5% going to all holders of the coin, and 5% going to the liquidity pools (with 2.5% of this being changed over into Binance Coin, but that’s another story). And to put the cherry on top, unlike Bitcoin, which has a specified coin ceiling, SafeMoon plans to burn tokens in order to combat inflation. The rate of burn is not released, nor is it established in the whitepaper of the project, rather it is done as the overseers of the coin see fit. So far, 416 trillion SafeMoon have been burned at the discretion of the coin moderators.

In the future, SafeMoon developers plan to add an NFT market portion to the blockchain, allowing users to both create and sell NFTs. They also report that users will be able to use the platform to create their own cryptocurrencies. As of the publishing of this article, there is no sign of this promised technology just yet.

SafeMoon was created by a team of 6 people, John Karony, Thomas Smith, Trevor Church, Hank Wyatt, Jack Haines, and Jacob Smith. John Karony is the current CEO, and Thomas Smith is the current CTO. The entire team has prior experience in web development and software engineering and can all be found on LinkedIn. 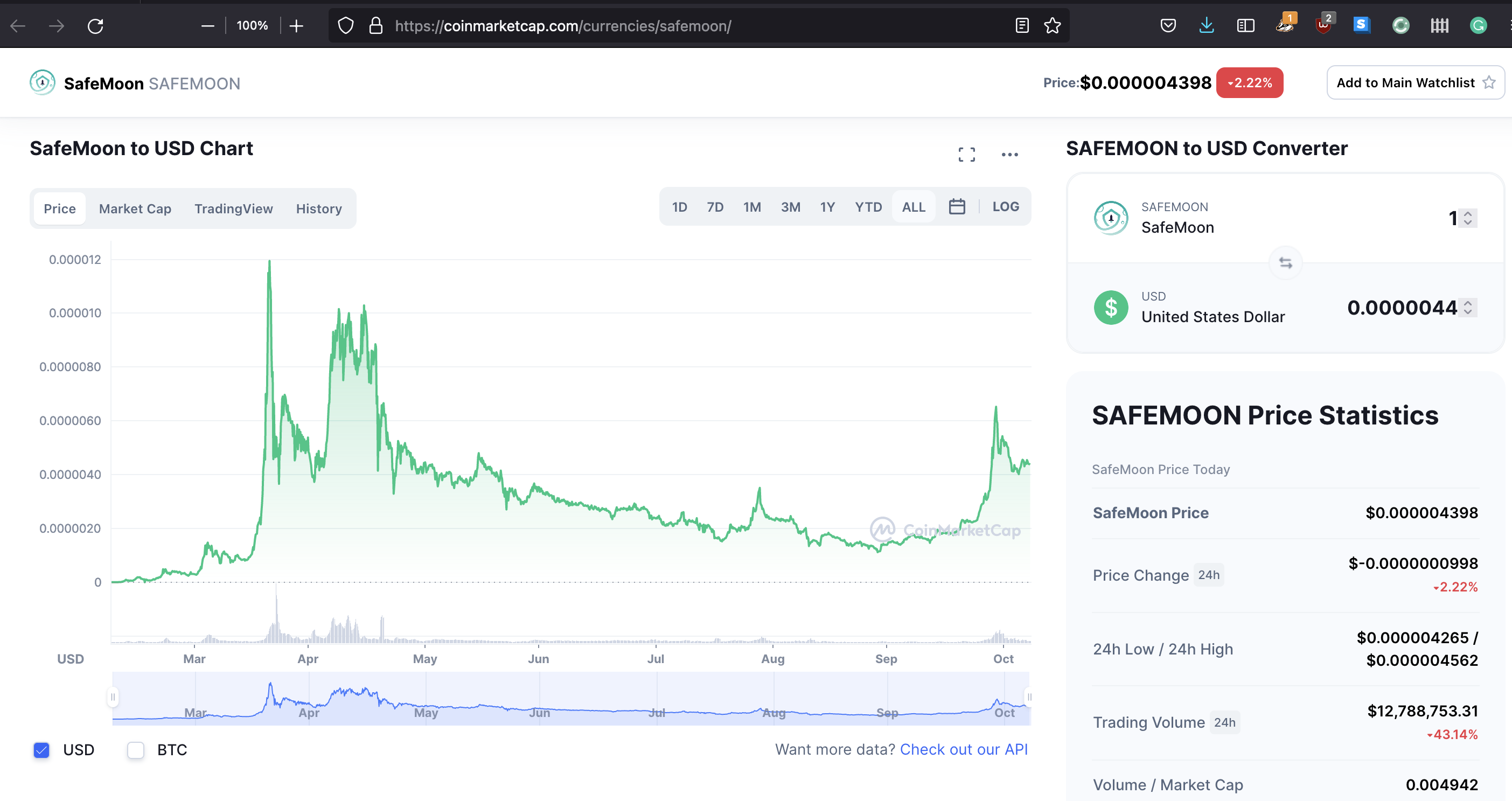 Should You Invest in SafeMoon?

Here at MintDice, we emphasize researching every project thoroughly before investing, and SafeMoon is one that, while it seems really safe in some aspects, seems unsafe in others.

First and foremost, SafeMoon is backed by Binance Smart Chain, which is a rather larger project, giving the small project some security. It is also centralized, which gives some people a better sense of security because they can get help when things go wrong.

But here is where the positives end. While centralization is a good thing for some investors, it is a bad thing for most cryptocurrency investors. This is because when you invest in a centralized cryptocurrency like SafeMoon, you are essentially trusting your money to its developers. And while some projects out there have developers who are trustworthy, there are just too many red flags when it comes to the developers of SafeMoon.

Although all of them do have LinkedIn profiles (which is a step safer that the obvious Squid Games Scam Coin) many of these profiles have work experiences that don’t check out. The pages lead to error messages (no website to be found) or the work experience that is listed is vague at best. There is simply no way to check the history of the developers work. Also, they have a store that sells SafeMoon merch. While this is expected once a coin becomes popular, it is a bit weird for a coin that just launched in March 2021. This has turned many investors away from the project.

As has the fact that the creators can choose to burn as much of the coin as they want, whenever they want, as this is basically like trusting the US government not to over inflate the currency. Yes, they have the power to no over inflate the US dollar, but do they use it? Not always. See the problem?

Basically, if you believe in the future of Binance Smart Chain, SafeMoon might be a good investment for you. But if you are looking for a secure alt coin investment, this currency likely isn’t it. Especially if you look at how the price has already experienced some wild price fluctuations in the short seven months since its launch. Plus, there is just no getting past the fact that SafeMoon doesn’t seem to have a proprietary use—meaning there are a million alt coins out there on the market that perform the same function as SafeMoon, but in a manner that is more beneficial, decentralized, and secure for investors.

Overall, the cryptocurrency world can be a tough one to navigate, but it is also a world that is filled with infinite options. And with so many options for great projects out there, SafeMoon is probably one you’re better off skipping. But make your own decision, because it could also be a safe way to get your money to go to the moon.

Ready to head back to the casino for some in-person gaming? Find out all about the restrictions before you go!

Want to get paid to live in a casino? Thanks to a lucrative program offered by all three mega-casinos in Las Vegas your dream can become a reality! Read this article to find out more information.