To many cryptocurrency watchers, Ethereum’s performance has been dismal since the start of its 2018 decline. The currency’s inability to make an impressive comeback from the market recovery following the 2017 crypto boom has seen the platform go from one of the most hailed, to one that continues to fall in value. Nonetheless, Ethereum still offers the crypto ecosystem a lot of undeniable value even amidst fierce competition from platforms like EOS.

At this point, potential value may not be enough and we are forced to look at Ethereum’s chances of survival based on its price behavior over time. When Ethereum hit its peak of $1,432.88 USD on January 13, 2018, it was a sign that the platform was not just valuable in its application – it was profitable as well. Now, that no longer seems to be the case for investors.

Ethereum is a decentralized platform on which applications are built. It is based on blockchain technology and powered by ETH, its central token. Created by Vitalik Buterin in 2015, it is the second largest cryptocurrency by market capitalization as well as one of the most popular.

It is an open software that encourages software developers to build independent applications that users can interact with on the blockchain. It was first described by Buterin in November 2013, and publicly announced in January 2014 before raising more than $18 million in its ICO. Since then, the platform has seen many ups and downs such as the DAO attack and the creation of apps like Cryptokitties.

Over time, Ethereum has seen some significant dips in price, the first of which happened in 2017. According to a tweet by Eric Wall, a popular crypto researcher at Cinnober, the ETH downturn was caused by blockchain projects that raised hundreds of millions. Apparently, many of these projects dumped their ETH on the crypto market, leading to a domino effect on many major digital currency exchanges around the world. 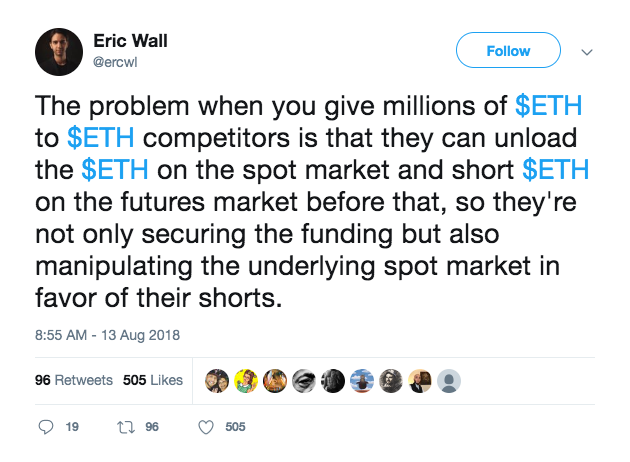 Each dip could be seen as either a positive outcome and great point for loading up on more ETH or a negative one that led earlier buyers to lose money. Unfortunately, most of these dips have turned out to be terrible buying points, since the price of Ethereum has hovered over $200 through most of 2019.

Ethereum is currently showing a lot of variation in its market trends as well as high volatility, so it's difficult for anyone to really see how it will behave in the future. At the beginning of January 2019, its market capitalization peaked from $13.8 billion to $16 billion in a couple of days. Unfortunately, this figure quickly fell to 10,823,499,966 at a price of $103.34 per ETH. Things seemed to get better when its value hit another peak of $164.99, with a market capitalization of 17,321,111,638. Recent bull runs in most of the top cryptocurrencies have seen the price of Ethereum skyrocket to $267.2 per token at press time.

Despite minor losses lately, the ETH/USD price movement is bullish. However, it is constantly under downside pressure, registering losses. 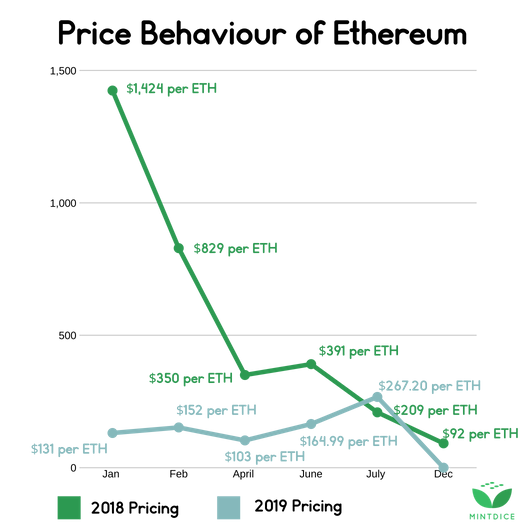 Since Ethereum is more of a functional coin than Bitcoin, pinpointing its future price is more difficult.

However, industry figures, enthusiasts, and users have continued to come up with predictions of its future value.

Unfortunately, Ethereum isn't as popular as Bitcoin, so these predictions aren't always in the media and often seem far fetched. But just like any other cryptocurrency, there is always speculation about its price because it is the main contributing factor to how the platform is used and adopted. Now, we take a look at these Ethereum price predictions to get a sense of what the future may hold for the crypto giant.

In 2018, Nigel Green, the CEO of DeVere Group predicted that ETH would hit $2,500 by the end of the year and increase further by 2019 and 2020. According to Green, the increase will be fueled by the number of people trading Ethereum, the popularity of smart contracts, and the future decentralization of cloud computing. This prediction hasn’t come to pass so far, since the price of Ethereum is only 10% of the predicted price.

Crypto expert and founder of Ark Capital LLC Brian Schuster sees Ethereum as a store of value that could one day have a market capitalization of up to $10 trillion at $100,000 per coin. He also believes that the world may come to see ETH as more than a single asset, and instead as a replacement for all currencies.

According to crypto assets influencer Ian McLeod, the price of Ethereum may surpass $500 by the end of 2019 due to a "global and monumental breakout." He also went further to say that Bitcoin may lose up to half of its market share to ETH in about 5 years.

Ethereum is currently seeing price increases similar to the ones it saw in early 2018. From the third quarter of the year, things may improve significantly and the crypto community expects an upward turn as the Ethereum team comes up with solutions to its scalability problem. If scalability improves, so will adoption and ultimately, the coin will rise in value. For now, ETH may continue to register small losses but its behavior does not show glaring signs of any impending dip.

Depending on how the rest of 2019 goes for Ethereum, 2020 may prove to be its best year yet. DApps will see further development as developers figure out the best ways to Implement smart contracts and payment structures. We may slowly leave the frenzied experimental phase of DApps and see more of these applications that focus on pressing issues. As Ethereum co-creator Steven Nerayoff stated in a January 2018 episode of CNBC Fast Money, decentralized applications have already increased ten-fold. If currency development progresses at this rate, Ethereum may rise up to $2000 by 2020.

The structure of Ethereum shows infinite potential so depending on context, $2000 or $100,000 may seem like a reasonable value to predict. This type of platform acts as the backbone of what will be the new decentralized computing.

Despite the problems it currently faces, there is still hope that the platform will recover and continue on its path as a sustainable and scalable virtual machine. Smart contracts also have the potential to change how contracts are executed in any industry even when centralization is involved. So even if the platform doesn't survive with DApps, it stands a chance with independent smart contract issuance.

Although Ethereum has nowhere near the value of Bitcoin, it is well above most coins in value and continues to maintain the second highest market capitalization through almost every downturn. Unlike other coins, the functionality of Ethereum sells it. It creates so much value to developers and companies that they almost have no choice but to use it while exploring decentralized computing. This is one of the main reasons why Ethereum transactions are here to stay.