While Dota fans everywhere lick their wounds and wonder where their end of the season tournament, that is only two months away, will be held, League of Legends fans find themselves in a much better boat. Not only has their tournament been confirmed, but it will also be one of the biggest years yet for a game that has very fast reached widespread acclaim.

The History Of Worlds

The League Of Legends World Championship, commonly abbreviated as Worlds, is one of the most viewed esports events in the entire world. The championship was founded in 2011 and typically takes place late in the year. The first event only hosted 8 teams but has since grown, with 2020 hosting 22 competing teams. This is down from the previous years, when 24 different teams traveled to battle for the Worlds title. The location changes every year, and in May 2021, it was announced that the coming tournament will be hosted in Shenzhen, China.

This tournament is performed round robin with a single elimination factor. This means that teams are eliminated one at a time. This also means that it takes weeks—over a month to complete. This has led to the tournament being held in multiple locations in past years. Though numbers aren’t available for the 2011 season, in 2012, the tournament brought in over 1.9 million viewers. The viewership has since expanded, and over 100 million people tune in to watch the final event of this tournament each year. Many people also choose to attend the events live, and the stadium in Shenzhen where it will be held in 2021 can hold up to 60,000 people, setting a whole new standard for this type tournament.

Teams compete for the honor, glory, trophy, and of course, money. The cash prize when the tournament started was $100,000 USD, and in the years since has varied upwards to an all-time high of $6.4 million USD. Of course this is nowhere near the prize pool of Dota, but it is still a pretty penny to win. All teams are paid for their participation in the event from this prize pool, with the lowest ranking teams leaving with 0.5% of the pot. The winner takes the largest percent of course, at just about 40%.

There was talk of postponing the 2020 tournament, as many other esports did due to the COVID pandemic. However Riot ultimately decided to go forward with the tournament when it was discovered that all but 2 teams would be able to travel and compete. Those two teams were from Vietnam and were unable to go because of government based regulations. For the 2021 tournament, as of right now, it is expected that players from all countries will be able to come to China to compete. 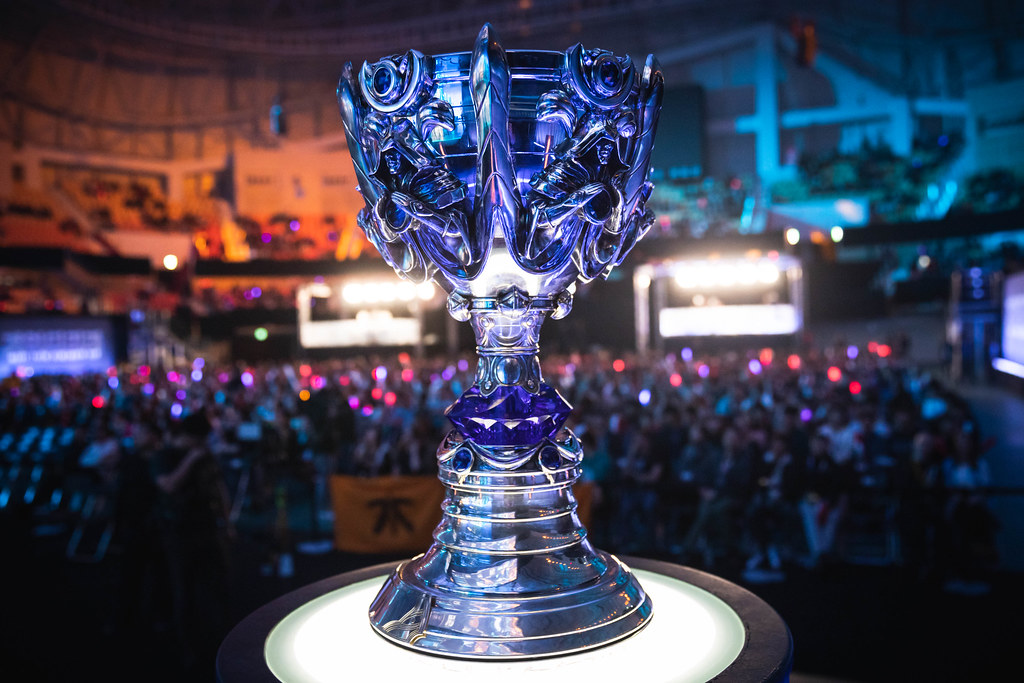 The coolest part of the Worlds tournament, besides the compensation, is the tournament. With the idea of the Stanley Cup in mind, Riot, the makers behind the World’s Tournament, wanted a trophy where players names would be added, but it would be returned to the tournament each year. To make this dream a reality, the trophy had to be quite large. But no one specified how large.

The result was the Summoners Cup, and the most coveted prize in League history. Because there were no weight restrictions, the cup weighs in at a massive 32 kg (or about 70 pounds) and is the biggest trophy of any sport in the world. The trophy didn’t exist for the first tournament, but has the name of all the winners from 2012 to the present. The cup is difficult to lift and takes the effort of the entire team in the true spirit of the game.

The Summoners Cup was created in London, UK by Thomas Lyte, a famous trophy making company known for making both the FA Cup and Ryder Cup. It is rumored that Riot originally wanted the trophy to be even larger, but because of the weight of the materials, the trophy would be too large for teams to lift, thus it was reduced to its current size.

More than any other sport, esports like League of Legends see the same teams return to glory year after year. Most notably, T1, hailing from South Korea has prevailed by taking home 3 of the 10 championships to date. They are followed by Gen G, another South Korean team, that has taken two championships. The other five championships were taken home by 5 different teams from a variety of countries.

In order to enter the Worlds Tournament, teams must win a more localized qualifier, thus making it all the more impressive when teams show up at the tournament regularly. Additionally, because the same teams compete year after year, this causes many deep seeded rivalries between teams that fans get to watch as they play out on the screen. Something very unique about esports, is that teams don’t always have to play on the team of the country they are from. For example, many American teams will seek out Asian players as they hit the top rankings more frequently. This has led to a regulation being imposed known as the LCS import rule. This rule makes it so there is a cap, or limit, on the number of players that can be acquired abroad for a national team. This way the American team won’t be five players from South Korea. There was talk last year of this rule being abolished, but to date nothing has happened. This means fans can expect to see their same teams with a few minor changes back in the ring this year.

Overall, this year’s World’s tournament is sure to be the best one to date, and if you’re a League fan, it might be worth looking into getting tickets for that 60,000-seat arena so you can enjoy the games in person. But either way, be sure to tune in to bet on your favorite team and find out which team will be taking home the prize money, and ultimate glory for the coming year.

In the year 2020, while the COVID-19 pandemic was sweeping the world, so too was something else, people’s belief and understanding in cryptocurrency. And thus the governments of many countries have decided to work together and try to ban cryptocurrency once and for all.

If you’ve been in the cryptocurrency world for a while, you may have heard of an open market app known as LBRY. And LBRY has become a hub for people to post digital content that can’t be censored, or removed based on the political views of the platform owners—as there are none!