Although digital currencies like Bitcoin and Ethereum have shown a substantial amount of progress over the past few years, recent volatility in the crypto world is giving skeptics more reason to stay doubtful.

While we have seen a consistent stream of innovation with new crypto coins, particularly in the past 18 months, there are now more than 800 of them that have been pronounced dead. This means that the coins have no value, trading at less than 1 cent. Most commonly the failure of these coins is due to their lack of integrity — being a scam or a joke — or because the product did not materialize. Many of the obsolete cryptocurrencies are listed on the website Dead Coins, which describes itself as a “strategic partnership to clean up crypto.” Coinopsy is another site that has reported dead coins. When considering reports from both sources, the number of dead projects accumulates into the thousands, with reasons ranging from true abandonment to outright scams. 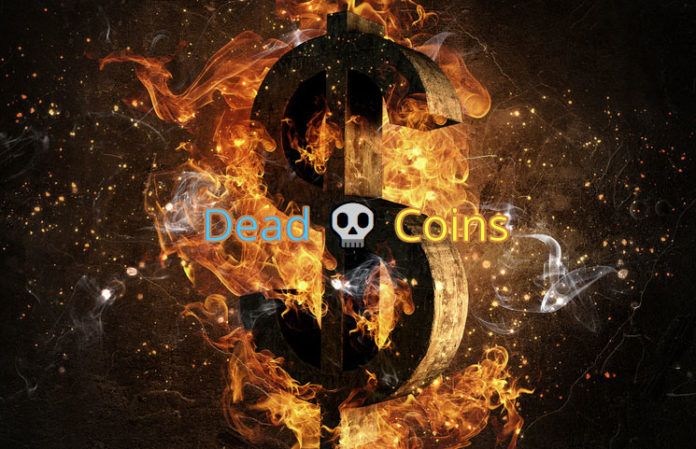 A process called an initial coin offering (ICO) can create new digital tokens. In this process, a start-up can issue a new currency that is available for purchase by investors. While the investor does not obtain an equity stake in the company, the purchased cryptocurrency can be used on the product of the company. Since the coins are cheap while holding potential for substantial returns down the line, people often buy into an ICO.

By their very nature, ICOs are highly risky. Moreover, these kinds of investments have been riddled with fraud. Just in 2018, a scam ICO called Giza was reported by CNBC. It was a fake startup that ran off with $2 million in investor money, a money laundering scam that gave plenty of fuel to skeptics to continue to doubt the legitimacy of this industry.

It is important to keep in mind that everyone expects the startups to fail. The problem is the massive amount of cash that floods into these projects before they are ready — this is the primary cause for concern. When startups receive more fuel than they can keep up with, the resulting conflagration ultimately consumes both the company and the founders, which is not helpful to the investors in return.

The conflagrations are, unfortunately, a global phenomenon. In 2017 alone, dead ICOs and scams raised $1 billion, and nearly 300 startups had been marked as questionable. The lock-ups and pricing scams within the ICO market are using greed rather than rational thinking, and are hurting the industry more than helping it. In the end, it is crucial to invest only what you can afford to lose and expect any token that you invest in to fail. Then if it succeeds, you will be pleasantly surprised, and if it fails, you will avoid devastation.

Even Bitcoin, the biggest cryptocurrency by market capitalization or value, has had a tough year.

Although it hit a record high of nearly $20,000 last year, it has since decreased by nearly 70%, according to data from CoinDesk. While Bitcoin is still among the stronger of coins, many others have not been as fortunate. To note are five of the greatest failures in cryptocurrency history thus far.

SpaceBit has long held the status of one of the most ambitious virtual currency projects thus far. And perhaps rightly so, as this is the company that wanted to launch several “nano-satellites” into orbit to provide a globally-accessible blockchain, which would be used for the storage of Bitcoin as well as helping unbanked regions access financial services. This announcement attracted much attention and enthusiasm from the public, gaining massive support behind them. However, the project ultimately disappeared. There was never any prototype or proof-of-concept, and eventually, all talk about SpaceBIT faded out completely. Supposedly the team behind SpaceBIT is now completely focused on a new project called BlockVerify, so SpaceBIT has been put on the shelf for good.

Originally branded as “Gems” but now named “GetGems,” this was a social networking platform that uses cryptocurrency for member payments if they view advertisements within the app. Having made grand claims in 2014 about disrupting social media, the result was somewhat disappointing with an underwhelmingly low crowdsale that year. Since then, GetGems has been overtaken by competitors, but they are still running; they have seen the most success in the country of Uzbekistan, ranking in 63rd place among apps.

Although this cryptocurrency began as a joke, it quickly evolved into a success with a passionate community behind it that became known for donating to charity with DOGE. After a successful streak, the Dogecoin collapsed. To make matters worse, founder Alex Green had disappeared with everyone’s money, shutting down the exchange. This led to the crashing of DOGE and disbandment of its community.

Launched in 2014, PayCoin grew to be one of the largest crypto assets worldwide by market capitalization. The coin’s white paper presented a vision for new variations of blockchain technology that would produce a new breed of cryptocurrency. However, it quickly became evident that the coin would not live up to this vision when its founder converted PayCoin into a generic altcoin clone, which made it easier to push onto the market faster. As it lacked follow-through, people ultimately lost faith in the coin. By 2015, GAW shut down entirely and faced a federal investigation, with its founder fleeing the United States.

Taking first place in cryptocurrency failure is the Decentralized Autonomous Organization (DAO), an Ethereum-based coin. While its beginnings were met with great enthusiasm, including large purchases of the token, one incident had changed the entire course of this currency transactions. When an attacker exploited a vulnerability in the DAO smart contract, this led to a loss of more than $50 million in assets. After information about the attack became well known, the token became abandoned by traders, throwing it into a downward spiral.

There has been intense pressure and skepticism placed on the crypto world, perpetuated by consistent news of novel scams or unsuccessful coins. However, optimism for the industry remains strong. Proponents of crypto expect regulators to learn to be more favorable towards the field, which could boost participation in the market. Similarly, there is a lot of optimism for the future of ICOs as an alternative to initial public offerings and venture capital funding. It is true that many coins have not survived, but there are also many coins that have. Every impactful innovation has its trials and tribulations, but that does not mean that it cannot evolve into a success that improves the way we live our lives.

Joseph Lubin is one of the eight founders of Ethereum, the blockchain-based, open-source platform, as well as the founder of ConsenSys, a blockchain software technology company that builds decentralized applications on Ethereum. He is also estimated to have a crypto net worth of $1 billion to $5 billion.

Quadrant is a blockchain protocol designed to solve the problem of data sourcing and organization. The platform collects data from disparate sources, organizes them and creates new data products from these sources that users can easily purchase.