One of the cool things about living in the United States, is you can head to the airport and hop on a plane to any of the other 50 states pretty much on a whim! Well, in theory. As of late, the air travel industry has been experiencing numerous disruptions, and it is beginning to make tourist reliant cities, like the gambling capital Las Vegas, Nevada, upset.

So what is happening to cause air travel to be unreliable? Like many things in life, this isn’t a cut and dry case, and several factors are coming together to create the perfect storm for air travelers. Keep reading to discover more about why the air travel industry is struggling and how you can still gamble safely without having to rely on air travel.

Imagine you are flying from Newark, New Jersey to Las Vegas for a weekend of fun, when another passenger refuses to comply with flight attendant instructions. For whatever reason, this situation begins to escalate, and the man ends up punching a flight attendant. Now the flight is required to divert to a different city to take the man off the airplane. Suddenly you find yourself sitting in the Minneapolis airport missing out on Las Vegas fun while the police try to sort the situation.

You may think this sounds crazy, but the FAA reports that passenger disturbances are at an all-time high when compared to previous years. And this above situation actually happened to a plane full of United passengers. Granted they did eventually make it to Sin City, but hours later than originally planned.

There is no clear reason why passenger disturbances have been up, but many believe it is tied to the fact that everyone spent months sitting at home by themselves last year accruing unemployment money. This gave lots of people who would normally not fly, extra money to do so. And on top of that, they had two full months of doing whatever they wanted and don’t want to listen to other people now. Many also speculate that the low prices of airline tickets, as airlines desperately try to return to the green financially, is also a factor. It could also be that deteriorating race relations and an increase in social unrest is carrying over from the ground to the sky, but again this is pure speculation. The above situation sounds bad, but at least you actually get to make it to Las Vegas. Many people across the nation are finding their flights straight up cancelled due to staffing shortages. This is because every plane has a required number of crew members needed to operate it, and airlines don’t have people to call when staff call out sick or don’t show up to work.

You may be wondering why this is suddenly a problem now, and honestly it has a lot to do with the pandemic. First and foremost, airlines laid off lots of employees during the pandemic. And now that they need them to come back, they are finding that many found other jobs when unemployment ran out in March. That, and some are reading the news and don’t want to come back to a sky filled with violence. Additionally, it takes time to call these employees back, as the airlines have to give them a certain amount of notice, usually at least 30 days depending on union contracts. This means that when people book last minute, the airline may not realize it needs to add a new flight, and call back furloughed employees until it is too late.

To top it all off, COVID is still around despite the vaccines. And airline employees are required to call out of work when they have COVID like symptoms, even if it’s a result of the vaccine. And since COVID often presents as the common cold, many employees have to call out while they are getting tested for the virus, and if they test negative later, it is often already too late.

To put the icing on the cake, the weather has been especially bad this year, notably in the Midwest and Florida. This has caused flights to have to land in other cities because they are unable to land in airports like Denver, Miami, and Dallas due to tornadoes, tropical storms, and severe thunder storms. And although you may not be traveling to one of the above cities, your plane may have been coming from one of those cities, causing your flight to cancel.

For example, say you are flying from Minneapolis to Las Vegas for a bachelorette party. But your plane is planned to come in from Florida, it will unload, you will board, then head for Vegas. If your plane is unable to leave Florida, your flight could be cancelled due to weather even if the weather is good in Minneapolis. 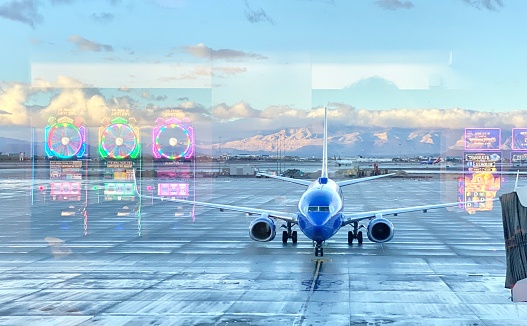 What Should You Do?

If you are lucky enough to get on a flight to the fabulous Las Vegas that isn’t cancelled, you need to be nice to your flight attendants and be sure to behave—encouraging other passengers on the flight to do the same.

But if this all seems like too much for you to deal with for a weekend of gambling fun, you should instead look to do your gambling online. There are many online casinos that have odds that are equivalent, or better than those found in the casino. One of these casinos is called MintDice, and they offer a wide range of fun games that you can play from the comfort of your own home. Not only that, but there is a chat feature, so you and your friends can chat while you are playing, giving you the feel of being in the casino without having to change out of your pajamas.

For those who prefer games like poker, there are great options available for this online as well, such as PokerStars and PartyPoker. On these websites you can play the same poker games that are available in casinos from your kitchen table. And there will be no stress about getting a flight to mess with your mojo.

Overall, the COVID pandemic has ruined a lot of things, flying domestically in the US being one of them. But it also has given lots of online companies time to grow, meaning you no longer have to travel to participate in the activities that you love, like gambling! So slip on your slippers, grab your coffee, and enjoy a quiet morning playing slots from the comfort of your couch.

As cryptocurrency becomes more and more popular in society, so too will cryptocurrency debit and credit cards . In fact, there are already quite a few out there on the market. So how do you pick which one to use? Read on to find out.

It’s always nice when your favorite website gets an update, and this week, MintDice, one of the best online cryptocurrency casinos, announced an overhaul of its own. Check out this article to learn all about the changes that were made!