Although it’s safe to say that Bitcoin is much more popular today than it was even one year ago, it's still far from reaching the level of adoption of fiat. Even though several products and blockchain projects have been built around it, Bitcoin's volatility has discouraged many from using it as stable money.

This has led to regulatory problems, issues with banks, and ultimately, lack of acceptance by businesses. Since Bitcoin can’t be spent on the simplest exchanges of goods and services, many people are quick to convert Bitcoin assets into fiat currency to be used for purchasing items.

If a user holds Bitcoin and there’s an impending decline in the market, it’s reasonable to liquidate BTC by converting it to cash. 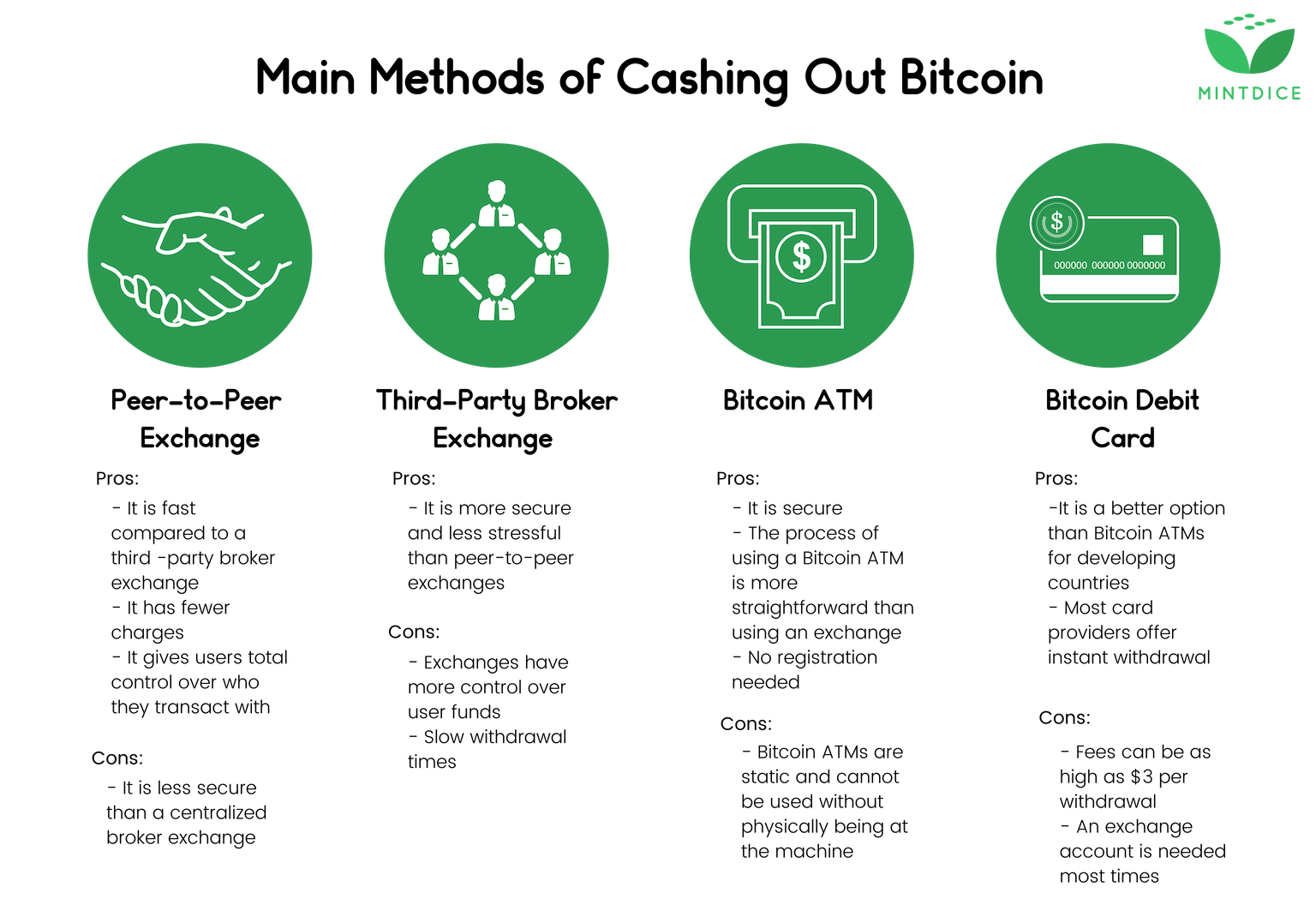 Cashing out Bitcoin via a peer-to-peer exchange is great for users who want to avoid the prices set by centralized exchanges. It also helps them avoid the charges and long waiting time that accompanies cashing out with broker exchanges.

There are three ways to accept cash on a P2P exchange: through a cash deposit, bank transfer or in-person. Cash deposits and bank transfers are generally safe but it is advisable to request a proof of identity to avoid fraud. Arranging a meet-up is a great option because there’s no need for an escrow.

How to Cash Out Bitcoin on a Peer-to-Peer Exchange

Some existing peer-to-peer exchanges include Paxful and Localcoinswap, which have no charges, and Localbitcoins, which has a trading fee of 1%.

Third-party broker exchanges, or centralized cryptocurrency exchanges as they are commonly called, handle the entire exchange of Bitcoin for cash. For example, on a platform like Binance or Coinbase, a user can enter a buy request and be automatically matched to another sell order. The exchange handles the sale itself with additional charges as part of the service.

This method is ideal for anyone who would rather not deal with others when buying or selling. The exchange is also liable in the event of theft or fraud that occurs on their platform. So if a user’s Bitcoin exchange account is compromised, their funds will most likely be replaced. It is also the best option for those who want to withdraw cash directly to their accounts after a Bitcoin exchange.

How to Cash Out Bitcoin using a Third-Party Broker Exchange

A Bitcoin ATM allows anyone to buy or sell bitcoin using a credit card or cash. It looks just like a regular ATM, except that it isn’t tied to a bank account. Currently, there are more than 2000 Bitcoin ATMs spread around the world. This is a good way to cash out without dealing with stress from Bitcoin exchanges.

It is straightforward and secure, and allows a person to withdraw cash or Bitcoin without dealing with another party.  Bitcoin ATMs vary by operation and some available types include Genesis1 Bitcoin ATM, Satoshi1 Bitcoin ATM, Lamassu Bitcoin ATM, and BitAccess Bitcoin ATM.

How to Cash Out Using a Bitcoin ATM

A Bitcoin debit card allows a user to withdraw cash instantly even when it’s loaded with Bitcoin. One great example is the CEX.io debit card, which is linked to the CEX.io exchange. This a good way to cash out Bitcoins when there are more traditional ATMs than Bitcoin ATMs around.

How to use a Bitcoin Debit card

Some of the best Bitcoin debit card providers include Wirex, Cryptopay, Bitpay, and Uquid.

When dealing with Bitcoin, users will need to cash out at some point. Whether due to a fall in price, the need to convert crypto investments into traditional ones, or just the need to spend cash instead of BTC, the need always arises.

Centralized cryptocurrency exchanges are currently the most common way to convert any cryptocurrency to cash. In fact, they are usually the starting point for beginners. They have significantly less risk than P2P exchanges and are also easier to use. Bitcoin ATMs and debit cards are not as common but are also easy, safe ways to cash out Bitcoin.

It’s important to weigh the pros and cons of each before choosing any of these options. Ultimately, they have the same outcome but depending on a user’s location, and other preferences, they are all drastically different.

Not sure how to select the best cryptocurrency gaming platform? Read this article to discover some of the best ones out there and how you should go about making your selections.

Looking for a new and exciting Bitcoin game? Read this article to discover more about MintDice's Bitcoin Plinko game including what it is, how to play, and why you should add it into your list of Bitcoin games.