Monero (XMR) is a private decentralized digital currency that ensures the total anonymity of its users and the details of their transactions. It addresses the need to protect one’s identity when carrying out financial transactions and uses a series of cryptographic functions to guarantee this protection - privacy and vulnerability are common concerns with those who use digital assets.

Monero, as well as its blockchain, can be downloaded on every popular operating system including Mac, Windows, and Linux. It is open source, so anyone can download it.

Like many other digital currencies, Monero has a rich backstory that has seen it blossom from a shaky attempt at cryptography to a strong digital currency with a vast and supportive community behind it. It is now the twelfth-largest cryptocurrency, with a market capitalization of $1.4 billion and a price of $83 per unit, according to CoinMarketCap. So where exactly did this privacy coin originate?

Monero first originated in April 2014 as a product of the CryptoNote reference code. The whitepaper was created and published on the CryptoNote website by an unknown figure called Nicolas van Saberhagen. It later formed the basis of many privacy coins, including Bytecoin, AEON, Fantomcoin, and Dashcoin.

The current Monero core team is made up of engineers and researchers all over the world who contribute to the code base and ensure that the system runs perfectly. Some of the founder’s ideas for a privacy coin were considered too radical to ever become mainstream, so they’ve been modified over time. Since Monero is open source, other engineers are encouraged to donate and contribute ideas to the project. To date, more than 240 engineers have contributed to the network.

The Relationship Between Bytecoin and Monero

In the course of Monero’s development, there has been controversy surrounding its relationship with Bytecoin, another privacy coin. Bytecoin was the first anonymous privacy digital currency established using the CryptoNote reference in 2012, shortly before Monero was conceived.

Unfortunately, the launch of Bytecoin did not run smoothly. Shortly after its launch, it was discovered that about 80% of all Bytecoin had already been pre-mined. Several developers in the digital currency community were unhappy with the situation and soon, a group of seven developers decided to fork the network.

This led to the creation of BitMonero, which eventually became Monero, the Esperanto word for  “coin.” Riccardo Spagni and David Latapie are two of the initial Monero developers known today, while the other five have chosen to stay anonymous.

Since its launch, Monero has moved its blockchain to other more flexible and efficient database structures with new minimum ring sizes to improve privacy. RingCT and other stealth features have been added to mask transaction amounts and addresses, and the Monero community continues to enhance privacy and security to protect its users’ interests.

Monero has a number of features which make it the cryptocurrency of choice for many users. They include privacy, fungibility, multiple-key technology, and ASIC resistance. 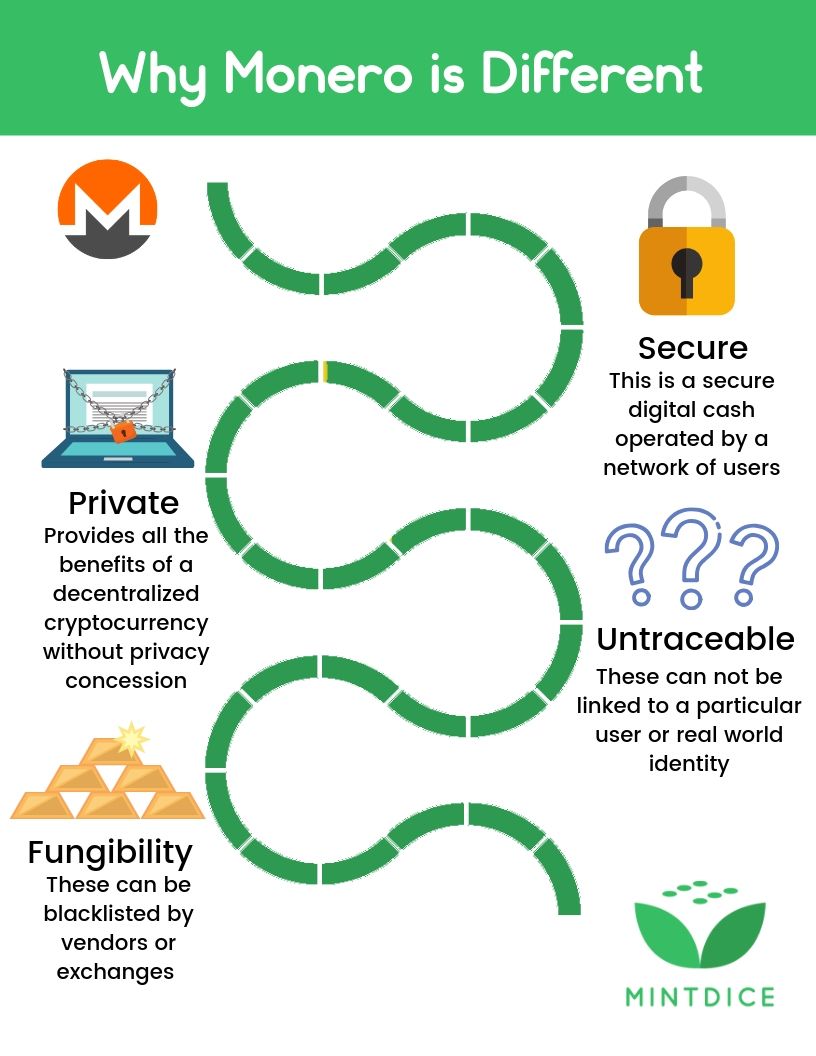 Monero’s CryptoNote technology runs on the principle of grouping public keys together into a structure known as ring signatures as a way to conceal the identity of a user. By combining these keys into a ring during a single transaction, an outsider can’t tell which of the keys sent the transaction. This is where Monero’s privacy feature comes from and is also the same technology used by Bytecoin in 2012.

Looking at the use case for digital currencies, such as remittance and fast transactions, it’s easy to counter them with the benefits of traditional currencies. Platforms like Bitcoin and Litecoin pale in comparison to Paypal and Venmo for sending money from one point to another.

They also pale in comparison to platforms like Visa in terms of speed. Many attributes of blockchains also become needless when compared to regular databases. However, the one use case that has stood the test of time is the obfuscation of transactions from centralized authorities and other parties.

Bitcoin offers some degree of privacy but transactions can still be traced to the users who sent them. With some effort, a user’s balance and all the other transactions that originate from their account can be seen.

Monero's modified ring signatures, in combination with RingCT and stealth addresses, hide the balance as well as sender and recipient details. Using Monero, a user is truly in control of their money since it cannot be traced.

Another attractive feature of Monero is that it is fungible. This means that one Monero coin is completely interchangeable for another. As an example, Bitcoins can be traced back to any transactions that they’ve been involved in.

Technically, a recipient can see which transactions their bitcoins have been involved in and can decide to return them based on the nature of a past transaction. Monero coins cannot be traced back to what they’ve been used for in the past due to the currency’s privacy feature. So if one XMR has been used in a crime somewhere, it’s impossible for a user to tie it to that crime.

Unlike Bitcoin and many other popular cryptocurrencies that use a Public Key and Private Key, Monero uses multiple keys, including:

The number of keys makes it a lot more difficult for a malicious party to control a Monero account through phishing.

Bitcoin has been criticized for its mining process, which requires specialized devices known as Application Specific Integrated Circuits (ASICs). Compared to Graphics Processing Units (GPUs) which are used to mine many other currencies, ASICs are expensive and use up a lot of electric power.

This makes the mining process less inclusive since only a few groups can afford it. These groups control most of the power on the Bitcoin network, leading to centralization which goes against the decentralized nature of Bitcoin.

Monero, on the other hand, uses an ASIC-resistant hashing algorithm known as CryptoNight and can be mined using basic GPUs and CPUs. This makes the entire mining process more affordable, decentralized, and inclusive.

Monero is a fresh take on cryptocurrency and what it truly offers. By examining the way the platform operates, it is easy to see just how much value cryptocurrency and blockchain will bring to the world. Not only is it completely untraceable and secure, anyone can use it.

Monero ensures that in a sense, everyone can become their own bank with a place to securely store their funds and access it whenever they want without prying eyes knowing the details of their transactions. Granted, such a feature can also have negative uses and at some point, there needs to be a way to reduce the rate of crime on the network.

Monero is the largest privacy coin in existence and has shown rapid growth over the years. Compared to Bitcoin, its development regarding privacy, fungibility, scalability, and decentralization is more advanced and more valuable. Each of these features is an asset when it comes to carrying out transactions that are truly untraceable and secure.

So far, the Monero core development team has made the network more efficient and continues to set the bar for other privacy coins entering the space. Hopefully, the competition will continue to drive better enhancements, giving rise to an even more secure privacy coin.

Fifteen years ago when Mark Zuckerberg and Eduardo Saverin created what would become Facebook, it would have been difficult to picture just how powerful that project would eventually become.

Podcasts are a great way to acquire information and learn about any subject, especially for those who don’t have the time or interest to read long articles and books all the time.