The constant bear runs of 2018 left many crypto users guessing where they stand with their various investments. Bitcoin left the biggest mark with its negative price swings, a stark contrast to its behavior in 2017. However, it would seem that 2019 has brought a new chapter to crypto investment as the top coins and other altcoins make a slow and steady recovery.

Now that old investors are recuperating from the loss and new investors are joining the market, the decision of which coins to invest in is a difficult one. To be fair, most coins have great features, milestones and plans to positively change one mundane system or the other. If successful, investors in these coins stand to gain a lot in the long run. The decision becomes even more difficult considering the loss that could come from picking a particular coin even when it has shown so much prospect. Cryptocurrency is unpredictable and users must be careful when choosing which ones to dabble with.

Bitcoin is the go-to currency for many investors, old and new alike. Compared to other currencies, it has been fairly stable in its ups and downs. However, seasoned investors know that the true gems are the unpopular coins that are not usually in the headlines but are popular enough that their names are familiar. Coins like these usually have strong community support and similar price movements which seem to be in tune with that of the larger coins. While we here at Mintdice don’t claim to be investment experts - and remind you that any investment carries with it risks to the investor - these are some options that might be worth a look, especially in the midst of uncertainty. Some of the best unpopular altcoins to consider in 2019 include Neo, Cardano, EOS, and Dash.

NEO is an open-source decentralized platform with the capacity to host decentralized applications, projects, and smart contracts. It is China's largest cryptocurrency, and is often called the Chinese Ethereum due to its structural resemblance to the larger currency. The basis of Neo is founded on the need to digitize assets in a way that creates a smart economy. From applications that help people interact with other people (banking, commerce, and the service industry), to applications that facilitate interaction between devices (Internet of Things). The NEO blockchain system is powered by the NEO token and uses a delegated Byzantine Fault Tolerance (dBFT) mechanism to ensure high speeds on more than 8000 transactions each second.

NEO can be bought on:

Cardano is a blockchain platform built on the need for sustainability and scalability. It was established in September 2017 by Ethereum co-founder, Charles Hoskinson. It functions just like Ethereum and EOS, serving a foundation on which decentralized applications can be built. It is also one of the youngest currencies and has managed to rise to a market capitalization over $8 billion.

Cardano uses a consensus mechanism known as Ouroboros to ensure the effective running of its system. Unlike the Proof-of-Work mechanism used in Bitcoin and Ethereum, Ouroboros is solving the challenges associated with scalability.

For credit or debit card sources, Cardano can only be bought on Coinmama. However, if a user has other cryptocurrencies like Bitcoin, Ethereum, Bitcoin Cash, or Litecoin, they can be exchanged for Cardano on Bittrex, Binance,

Like Ethereum, EOS is a decentralized blockchain platform created for the purpose of making asset storage and transfer more effective. Its main focus is building scalable systems that perform efficiently regardless of the load they bear.

EOS has been highly controversial since its creation. It's voting methods have raised many questions in the crypto community, with many citing it as an unfair and unstable system. In 2017, the platform rose to the spotlight with its $700 million ICO and has risen to a market capitalization of more than $15 billion.  EOS is the perfect investment vehicle due to its track record of breaking price points even when the general outlook of digital currencies seems bleak.

Unlike Bitcoin, EOS functions both as an asset transfer platform and a base for building decentralized applications and smart contracts. One of its largest competitors is Ethereum, the first decentralized currency to present this functionality. The fundamental difference between both currencies is how they approach scalability, a necessary attribute of a future stable crypto economy. EOS uses a consensus mechanism known as Delegated Proof-of-Stake (DPoS), where designated members of its network handle the security and confirmation of transactions. Ethereum, on the other hand, uses Proof-of-Work (PoW) mechanism, which isn't as effective. EOS also supports many common programming languages like C++, while Ethereum supports only solidity, its native language.

When it comes to buying EOS, there are limited options. A debit card can only be used on Bitfinex while Binance, Kraken, and Shapeshifter, are a great place to exchange Bitcoins for EOS.

Dash is a decentralized platform that promotes high-speed transactions just like Bitcoin or Ripple.  It was created by Evan Duffield in 2014 and named Xcoin, then subsequently renamed "Darkcoin." It was created from the original Litecoin source code and has functioned independently since then.

Dash is making a name for itself due to its anonymity feature, which protects its users' identities when they perform transactions on its network. It is faster than Bitcoin and cannot be traced back to the origin of a transaction. Dash also has a self-funding system which uses a portion of mining rewards to develop itself. This ensures that the platform is always funded even when investors are not as forthcoming. These features make Dash one of the most attractive coins and it’s worth consideration by everyone looking to invest in cryptocurrency or blockchain technology.

Dash can be bought using cash on the Kraken cryptocurrency exchange. It can also be exchanged for Bitcoin on Poloniex, Shapeshift, and Bitfinex. 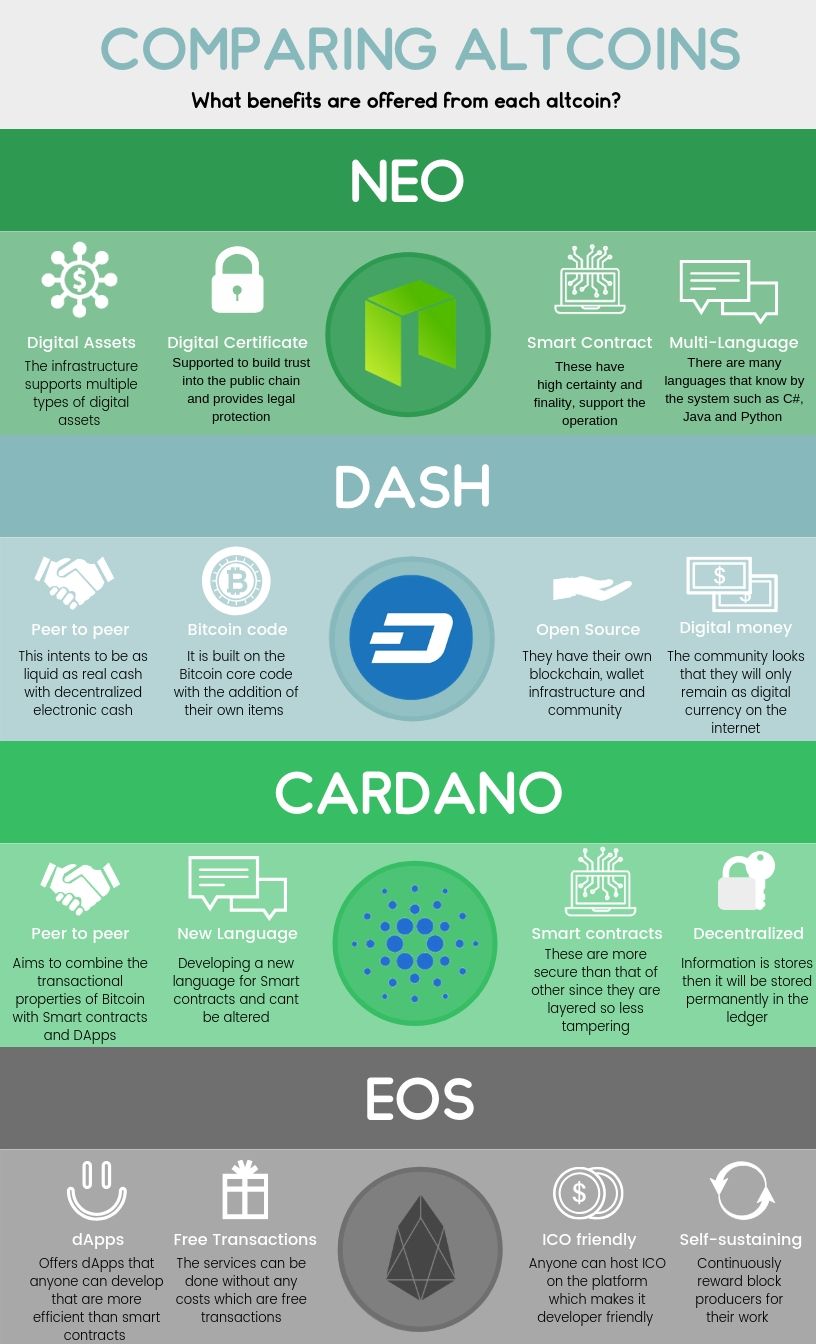 Making the right decision on which cryptocurrencies to adopt from this early stage is a major building block towards the future of any investor. Digital currencies have shown time and again how profitable they can be. On the other hand, what may seem like a good decision may be affected by market forces later. While there are never guarantees that investing in cryptocurrency will pay off, the four altcoins discussed above might be the safest options, especially for a beginner.

The emergence of cryptocurrency has brought about a new, rapidly-developing form of investment. Bitcoin is fast becoming a household name, due to its status as the biggest cryptocurrency by market share and the fact that although there are currently over 1000 cryptocurrencies, it was the first to emerge.

Bitcoin and other cryptocurrencies are gradually finding new applications as virtual currencies become more advanced. Finance is the most apparent application of these technologies, and many of its processes are becoming more efficient as a result of their implementation.